The conference Securing future food explored approaches and models of production that would achieve a more equitable food system, including ecological food provision and strengthening local food webs. Organised in the run up to World Food Day and the FAO Committee on World Food Security with the help of many UK Food Group members and Sustain volunteers, the event was held on 24 September 2010 in Friends House, London. 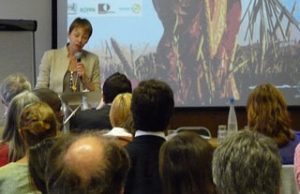 “Food has become a commodity to be traded. The only thing that matters under the current system is profit. Trading in food must not be treated as simply another form of business as usual: for many people it is a matter of life and death. We must insist on the complete removal of agriculture from the remit of the World Trade Organisation.”

“The world’s food futures are in the balance. Not only in regions such as sub- Saharan Africa where hunger is endemic in many countries, but in all regions, North and South, the sustainability of food supplies is threatened. The livelihoods of the small-scale food providers who produce, harvest and collect most of the food we eat, are being eliminated. And the productive, biodiverse environment and its natural wealth, which are used for food provision, are becoming increasingly degraded.” Securing Future Food: towards ecological food provision (UKFG, 2010)